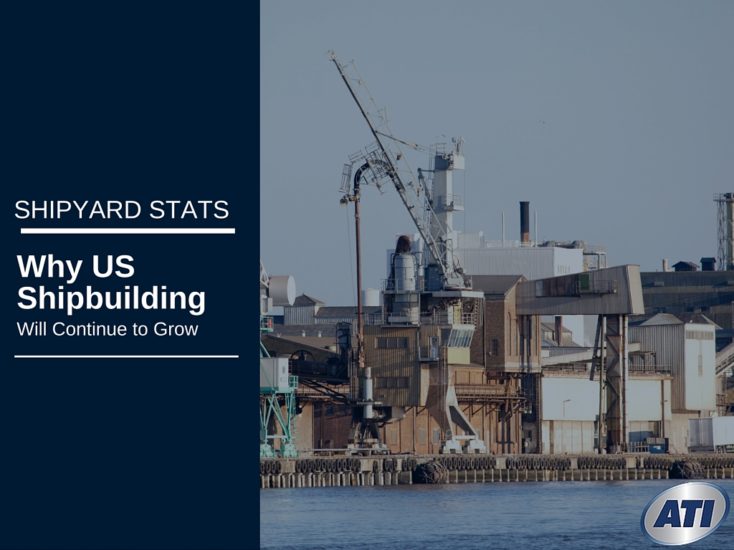 We feel safe in thinking you all saw the headline in the Kitsap Sun, “Shipyard Hiring 365 ‘Helper Trainees’’’ because, well, who doesn’t read the leading newspaper of Kitsap, Washington? Okay, so perhaps…perhaps…you do not subscribe to Kitsap County’s largest daily newspaper, but if you’re a fan of maritime welding, you may be familiar with naval shipyards. They are undergoing a resurgence and leading to growth in U.S. shipbuilding jobs. The Kitsap Sun keeps tabs on the large, local employer of note, the Puget Sound Naval Shipyard and Intermediate Maintenance Facility, and notes that over the past three years, the shipyard has had four waves of hiring, adding 1,000 jobs in 2013 and 1,650 jobs in two rounds during 2014, boosting “the workforce to 13,500, the most in decades.”

The U.S. Department of Transportation’s Maritime Administration (MARAD) says that, in 2013, the nation’s 124 shipyards had 110,390 private-sector jobs. The Puget Sound Shipyard accounts for more than 10 percent of those 2013 jobs. Naval Sea Systems Command (NAVSEA) designs, builds, delivers, and maintains the ships, including submarines, for the U.S. Navy. In 2015, NAVSEA propelled the Portsmouth Naval Shipyard, to add another 700 workers to its already large employee rosters, bringing the shipyard to 5,200 workers.

As detailed at Fosters, the growing workforce is “another shot in the arm for the Seacoast economy.”

“It’s huge,” said Paul O’Connor, president of the Metal Trades Council at the shipyard. “We’re infusing 715 people into our regional workforce, people who make good pay. We’re increasing our NAVSEA workforce by about 15 percent in one year. That’s unbelievable.”

This is part of NAVSEA’s overall plan to replenish its four major shipyards to restore them to full employment strength after the federal sequestration, and a wave of retirements, dropped shipyard numbers. The U.S. Naval Institute reports that NAVSEA commander Vice Adm. William Hilarides, said the workforce has grown and almost reached its goal.

“The good news is…we’re almost at the 33,500 that we’ve said is our ultimate goal,” he said. “…We have not hired like that in the federal government in a very long time.” Some might dismiss “bae” as slang for that special someone, but for shipyard employees, BAE means business, and a steady paycheck. BAE Systems is adding 500 shipyard jobs in San Diego to keep up with the U.S. Navy’s decision, the “Pacific Pivot,” to move ships to San Diego Bay.

BAE builds and operates drydocks, lifting entire vessels out of the water with ease and safety so that every part of the ship can be worked on. Its new floating drydock, able to hold a 950-foot ship, will arrive in late 2016, offering steady repair work for many years.

According to reports in The Times of San Diego, the “Pacific Pivot” has already added 2,000 jobs in 2015, with more to come, as roughly 60 percent of the Navy’s fleet will be in the Pacific Ocean.

Liquified natural gas (LNG) is a far cleaner fossil fuel than oil, and five large-scale U.S. liquefaction facilities, necessary for conversion of natural gas to LNG, is under construction with a projected capacity to export more than 12 percent of U.S. natural gas production in 2020, says a report at Maritime Executive. This translates to a need for 100 LNG ships in the next 30 years. This is because our country will move from importing LNG to exporting it, and the American shipyards will need three decades to meet the demand. One of the valued, highly skilled jobs needed in public and private shipyards is the maritime welder. Having knowledge to work as a structural and pipe welder, you could gain entry-level work in just about any shipyard in 26 states. According to the Bureau of Labor Statistics (BLS), the median annual wage for welders, cutters, solderers, and brazers as of May, 2014 was $37,420.

An Education in Welding Could Mean Future Promise

ATI’s Maritime Welding AOS degree program could be an excellent place to gain the skills and experience you need to tap into the burgeoning shipbuilding boom. In 55 four-day weeks, you learn all the major welding methods:

You gain specific knowledge in aluminum, structural and pipe welding. You leave the program ready to enter any shipyard and show your mettle with metal. Contact ATI today to learn how you can become part of the continued growth in U.S. shipbuilding jobs, and weld your way to a great career keeping our country ship-shape!