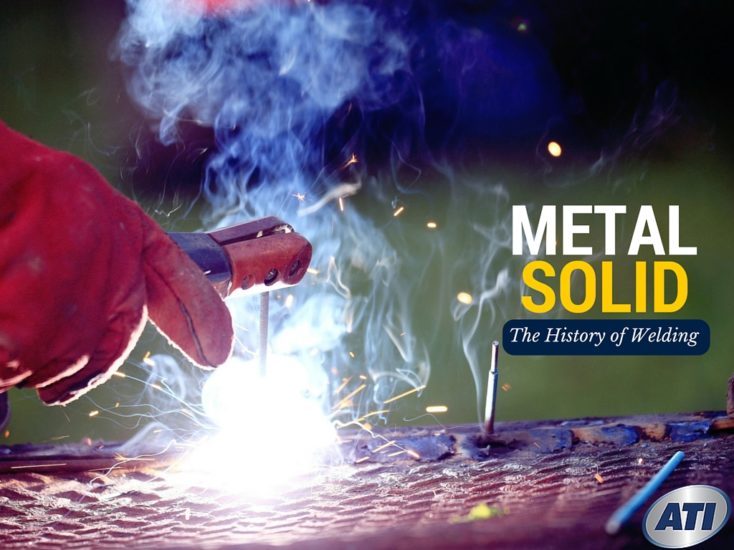 Industrial processes include smelting, electrolysis, sawing/cutting, forging, casting, tooling, soldering, die cutting, and welding, among many other skills. Of these, welding is defined as the most economical and efficient way to join two or more metals permanently, making one piece. Welding.com says that welding ranks high among industrial processes and uses more science and variables than any other industrial procedure. In fact, it is often called “industrial fabrication.”

Nearly everything we use today – from can openers to the PCB board inside your cell phone to the huge skyscraper downtown has utilized some method of welding. That’s a powerful process! And not only is it a vital, necessary job, welding is rarely boring because there is such a wide diversity of types of welding jobs. A welder can help build bridges in small townships, ships that sail around the world, or create pieces that keep space shuttles traveling out of this world!

A History: The Ancient Art of Welding

As with many of the professions that remain “hands-on,” the history of welding is fascinating. More than 2,000 years ago, welding was used to create small gold boxes for wealthy people. During the Iron Age (1200-1000BC), tools were used to weld pieces of metal together; that was the beginning of welding as we now know it, but it was the 19th century that welding we use today was developed.

The first conception of an arc between two carbon electrodes (using a battery) was in 1800, and in 1836, acetylene, a chemical compound, was discovered. In the mid-1800s, resistance welding with the carbon arc and the metal arc came into use.

Welding is an internationally-respected skill that continues to flourish. The first British patent for the process was granted to a Russian man who was working in a French laboratory in 1885. Working as a carbon arc welder became a hugely popular profession at that time, when welding pioneers were still experimenting with iron and lead welding.

When studying the history of welding, you’ll find that the Industrial Age was one of the most exciting eras for the pioneers of power-driven tools and machinery! C.L. Coffin of Detroit developed an arc welding process using a metal electrode, and at the same time, a Russian was pursuing how to cast metal in a mold.

In the 20th century, industry – and later technology – development was moving at warp speed! Inventors still struggled with the welding arc, as a coated metal electrode (using clay or lime) was developed for a more stable, controllable arc. In Sweden, the first stick electrode was created by dipping iron wire into mixtures of carbonates and silicates and letting the coating dry. The welding processes continued to be fine-tuned and the patents increased rapidly:

A relatively new process, explosion welding, was U.S. patented by DuPont in 1964. Using chemical explosives, one of the components is accelerated at a very high velocity called a solid state (or solid phase) process. It’s used to make a rust- or corrosion-resistant coating (alloy, nickel, stainless steel, etc.) for carbon steel plates.

The Future of Welding

Just as the history of welding is full of discoveries by people who wanted to find a better way to conceptualize, create, and refine industry processes, the future of welding is being constructed today by a new generation of professionals. It’s not a job for the faint of heart, either! Welders may be required to work in confined spaces or suspended on a scaffold, high above earth! Almost all welders work full time, and the Bureau of Labor Statistics cites overtime is readily available to those who want to earn more. For example, the 2014 median pay for welders was $37,420; some wages were higher or lower for welders, depending on industry-specific jobs.

In 2015, The Wall Street Journal featured an article about the potential for six-figure salaries for welders; specifically, a 24-year-old man in Texas who was able to buy a new car, invest in mutual funds and enjoy his favorite hobby because of his new career as a welder. Two-Year Degree and Special Skills Pay Off . . . said an investment in a 2-year degree sometimes has greater earning power than a four-year diploma:

In 2013, his first full year as a welder, his income was about $130,000, more than triple the average annual wages for welders in the U.S. High school counselors, who once almost automatically steered smart kids toward four-year colleges, now are more aware of the job opportunities for those with technical skills.

Here on the east coast, maritime welding is a trending career, and the job outlook is good! You could become one of those skilled professionals by applying for an apprenticeship, but the fastest way to a Maritime Welding Diploma (14 months) or a Maritime Welding Degree (19 months) is to call 888-346-2315 or contact Advanced Technology Institute. Just as others made industrial history using the ages-old art of welding, you can begin creating your own historical success story when you take the first step to a better future. Today is not too soon.

I enjoyed my time here at ATI I learned a lot of good information from a lot of good people. The staff there is great and they really care about you the craft. I find that that’s the greatest way to go.

DISCLAIMER – Advanced Technology Institute (ATI) makes no claim, warranty, or guarantee as to actual employability or earning potential to current, past or future students or graduates of any educational program offered. The Advanced Technology Institute website is published for informational purposes only. Every effort is made to ensure the accuracy of information contained on the AUTO.edu domain; however, no warranty of accuracy is made. No contractual rights, either expressed or implied, are created by its content.

Tags:acetylene, flash-butt, gas, history, iron age, projection, resistance, seam, spot, thermite, torch
Previous PostKey Traits to Look for in the Best Automotive Tech Schools
Next PostWhat is Expedited Trucking & How Can I Get a Job Doing It?